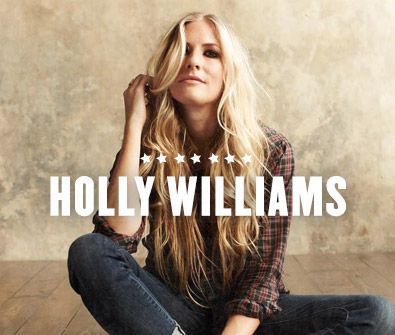 Holly Williams was practically born with country music in her blood.

Holly Williams was practically born with country music in her blood. As the granddaughter of country music legend Hank Williams Sr. and the daughter of Hank Williams Jr., Holly has deep musical roots. Inspired by her family’s success and determined to pave her own way in the music industry, the youngest Williams released her first studio album in 2004, which preceded two more albums - one in 2009 and another in 2013. Her 2013 album, The Highway, was released on Williams’ own record label and debuted at number one on Billboard’s heat-seekers chart.

Williams broke her arm and wrist in a 2006 car accident, forcing her to cancel her upcoming tour. The injuries Williams sustained made it questionable whether or not she’d ever be able to play the guitar again. After a three-year hiatus, Williams fully healed and began playing guitar and writing again, which prompted her to release her second studio album, Here with Me, in 2009. Here with Me was named one of People magazine’s top albums of 2009 and Billboard dubbed it as “one of the best singer/songwriter albums to come out of Nashville.” Be sure to make the pilgrimage to see Holly Williams this September in Franklin, TN!